In December 2017, 3cea purchased a Volkswagen E-Golf, the car was a demo model used by VW to promote their own electric vehicles, we decided to purchase the car with the aim of firstly reducing carbon emissions, promoting the use of electric vehicles and in turn this would also have the advantage of reducing staff travel costs.

I collected the car in Dublin and drove it down to Kilkenny, unfortunately the car was not fully charged, I soon realised that the 160km range on the car did not mean 160 actual kilometres, the faster you drive on the motorway the quicker the range goes down. This obviously depends on driving conditions but on average if you drive at 120km/h you will cover a distance of 0.4km but this will reduce your range by 1km, if you slow down to 100km/h the distance covered will increase to 0.6km, the real-world range comes into play at less than 80km/h.

From the first day of driving the car I began to see the issues with driving electric cars, the first major stumbling block was the lack of charging points in our region (Carlow, Kilkenny & Wexford) and in particular fast or rapid chargers (50kW). The 3cea office is based in Kilkenny but our work brings us to all corners of Ireland with regular travel to our clients, we soon found out that bringing the EV was not always possible.

I had a meeting in Waterford the next day but didn’t consider the next days drive. I was living in a duplex apartment at the time and couldn’t charge over night as I had no access to a socket another problem I have encountered since is the issue with terrace houses and bringing cables across public footpaths (I will come back to this in another blog post). I woke up early and charged at one of the 22kW on street chargers in Kilkenny City for about an hour, this gave me about 40km additional range. Kilkenny to Waterford City is 54km, I left with a range of 80km that soon started dropping as soon as I left the charge point. I took the M9 motorway to Waterford and had to travel at 80kph in order to conserve the battery, I made to Waterford with 8km range remaining, charged at one of the public charge points, lucky it was an all-day meeting as it took over 6 hours to charge.

On the drive back to Kilkenny I decided to investigate the fast charge network across the south east. There is one fast charger in Knocktopher, 30 mins from Waterford City or 20 minutes from Kilkenny City, I called in here to take a look. Unfortunately, the fast charge connection here is for the CHAdeMO only, this connection is mainly for the Nissan cars (Leaf, ENV 200 etc.). This led me to further investigate the quantity of fast chargers across Carlow, Kilkenny and Wexford and subsequently across Ireland. 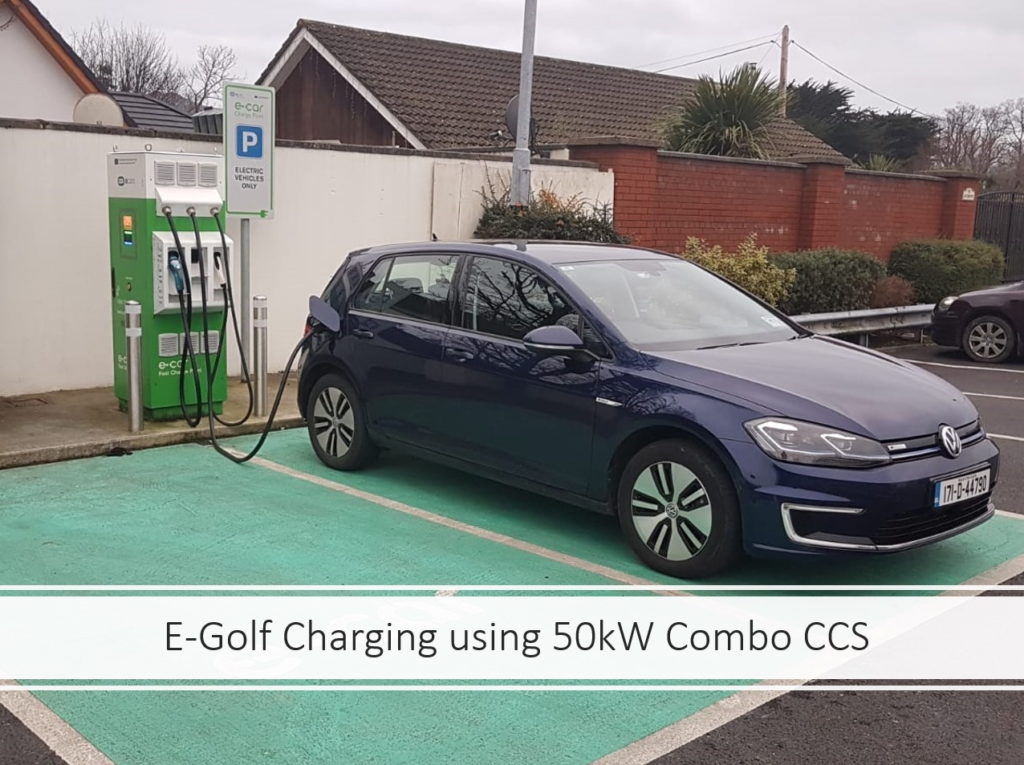 The picture above shows the E-Golf charging at one of the fast charge points, this one has three separate connections (CHAdeMO (50kW DC), CCS (50 kW DC) and Fast 43kW AC). At these charge points only one DC can charge at a time, something I didn’t realise before we bought the car. A question I have been asked recently is why all the connections are not the same, well it’s like the phone connections, different manufacturers adapted different connection types and it’s the same way with EV’s. The Combo CCS is the preferred connection type adopted by the European Union however we will still have thousands of CHAdeMO connections on Irish roads.  The picture below shows the three different connection types, these can also be used by Tesla but they also have their own charging network (Destination Tesla).  I also researched the possibility of getting CCS adapters, but the configuration of the connections does not allow this. 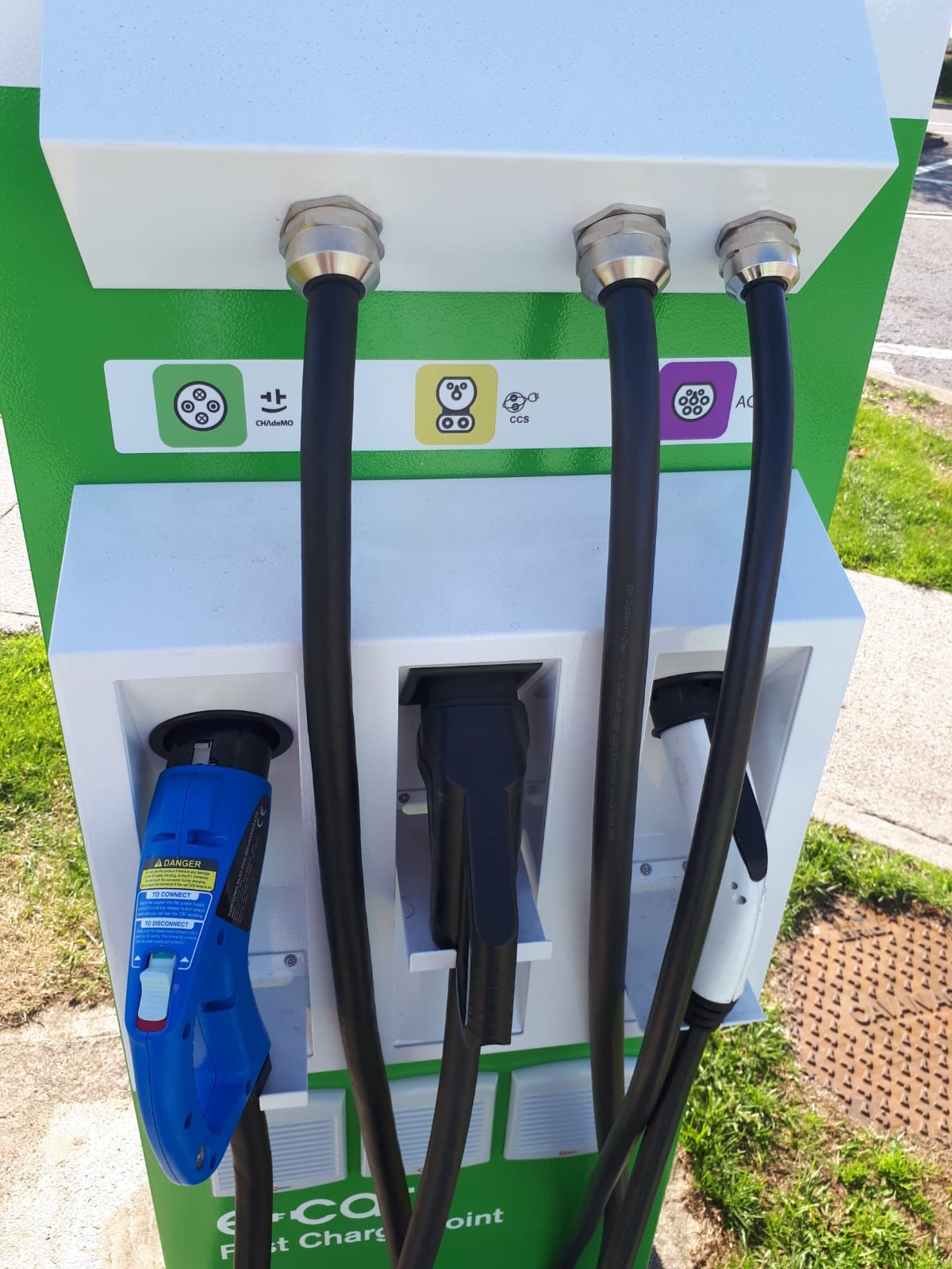 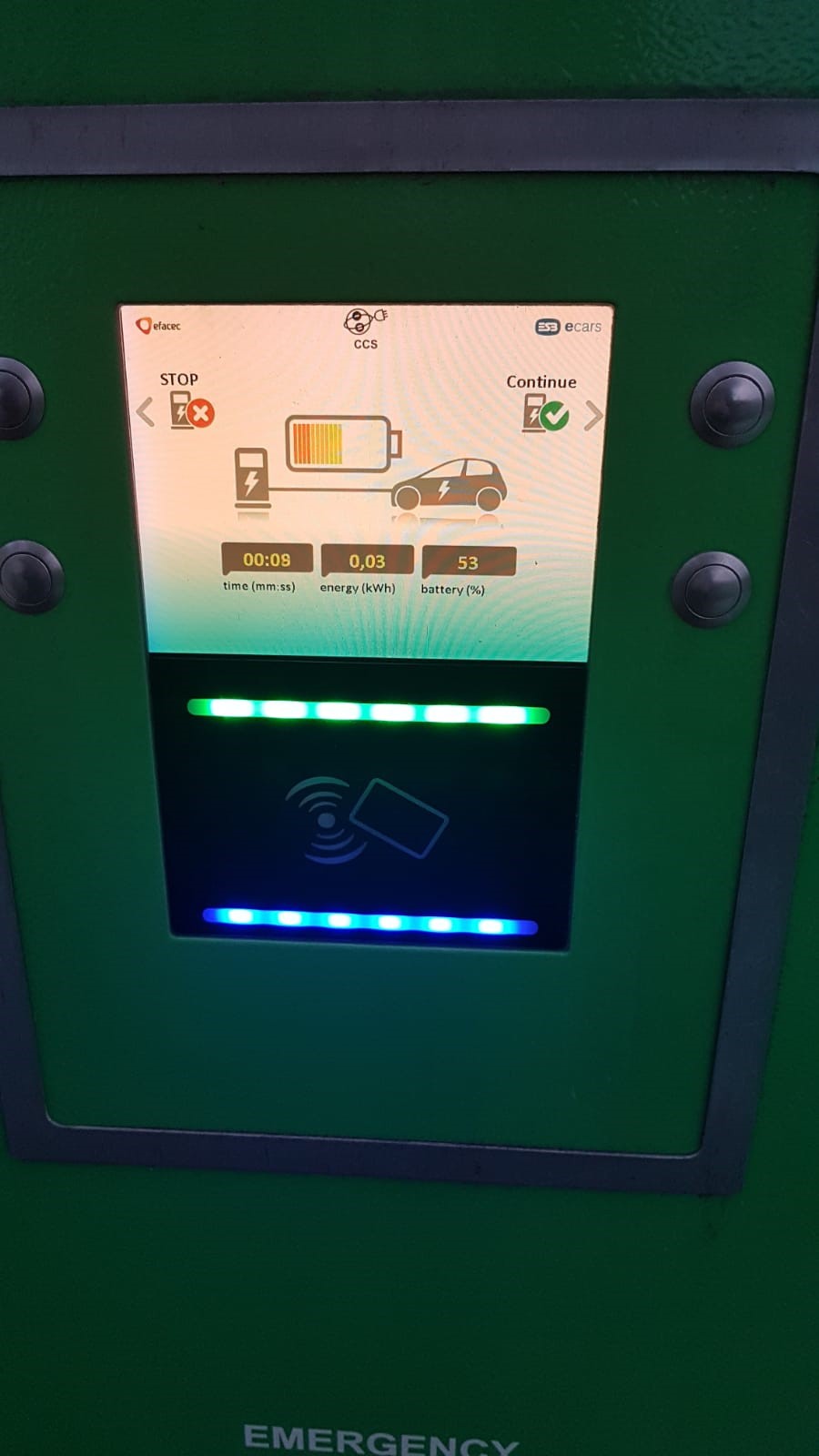 The picture about shows the status of the fast charge, every EV has an ESB E-car RDIF card, tap it at the machine and select the charge type you require. Generally, this will charge your car to 80% in 30 – 40 minutes. But its not all about fast charging, the most common type of charger in Ireland is the 22kW on street charger, there is approximately 1,000 of these across Ireland. Every car comes with a Type 2 cable no matter what make or model. This allows the user to plug into the 22kW charge point. The golf comes with a compartment in the boot to store the charge cables, one thing to consider is the use the boot, if you carry a lot of equipment etc. it can be difficult to access the cables if the boot is full. 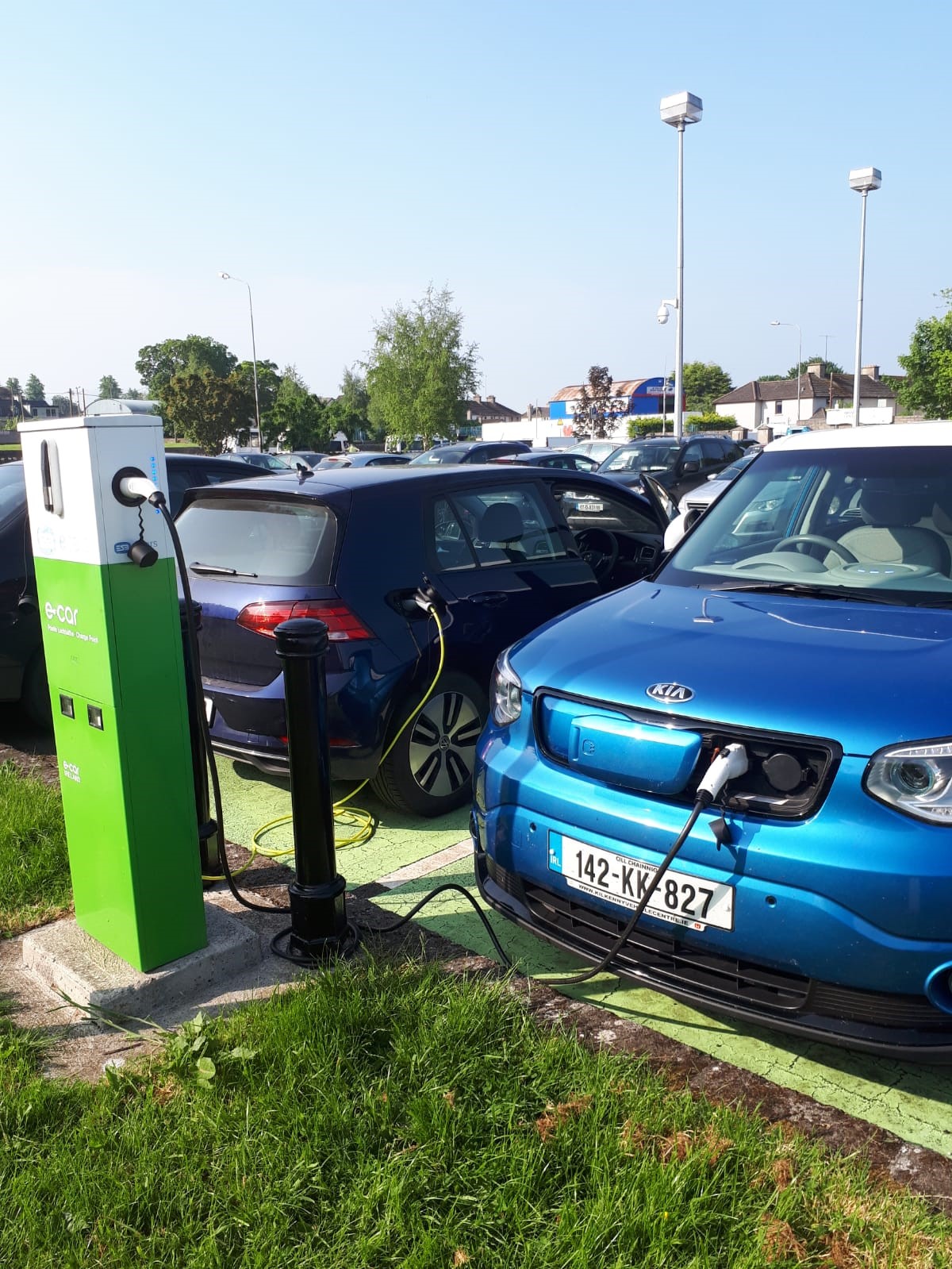 Winter and Summer Range on electric cars, is there such a thing?

Yes, there is, from the pictures below you can see the external temperature and corresponding maximum range. At 7 degrees Celsius the max range is 287km, however during the summer this will increase to a range of over 300km with an external temperature of 22.5 degrees. 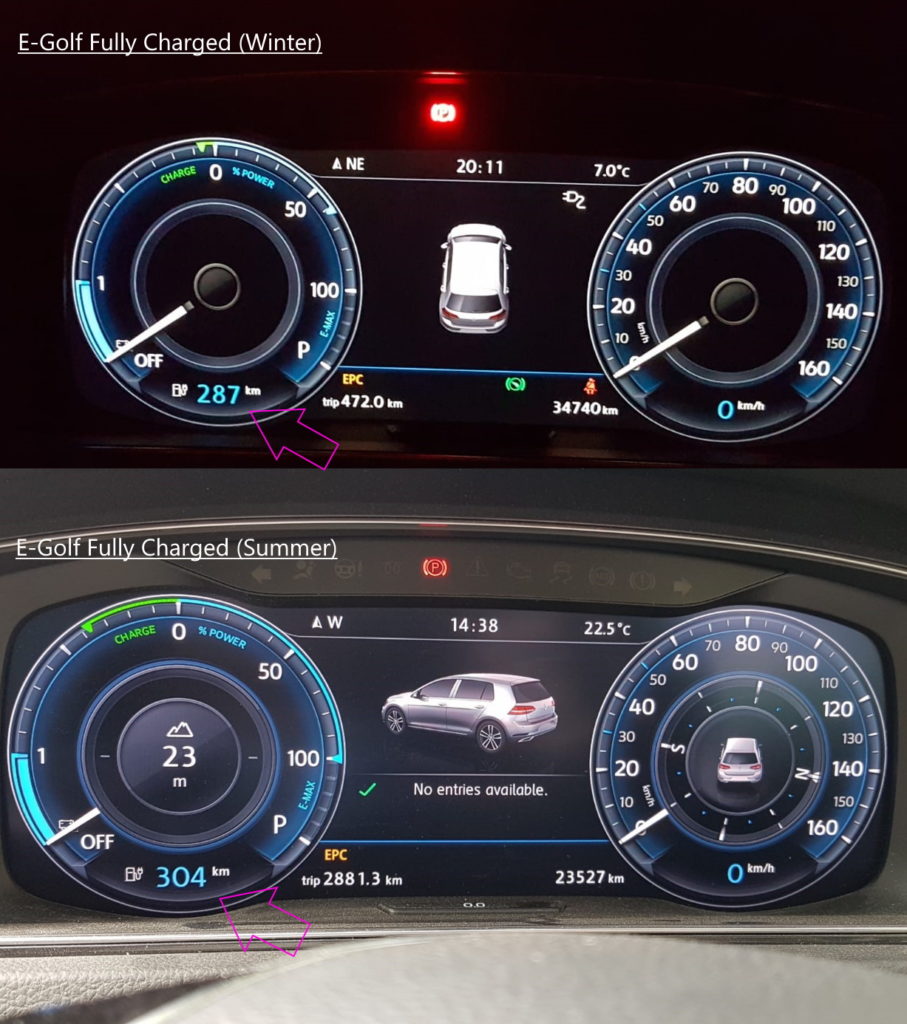 After driving the car for a year, the annual service was due, again unfortunately only two service points in Ireland Dublin and Cork for the e-golf. The service was a diagnostic test with new tyres and wiper blades recommended. The next service interval is due in another 15,000km for me this should be extended to 30,000km as a Leaf driver told me theirs is 30,000km as there is very little maintenance on them.

What needs to happen next?

The Climate Action Fund announced by Minister Richard Bruton allocated €10million to ESB Networks to carry roll out a network of fast chargers across Ireland. This needs to happen sooner rather than later with stakeholder engagement from local authorities and electric car drivers.

So, to conclude, the question we need to ask ourselves, is an electric car for me? You need to consider the following; your daily commute, local charging network and of course fast charging, what sort of long journeys you would take monthly, loads you carry.

Some of the terminology I have learnt in the past few years; 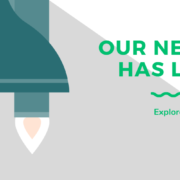 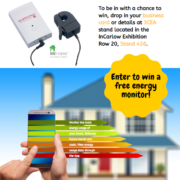 Visit 3CEA Stand at the #Ploughing2019 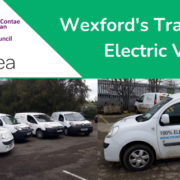 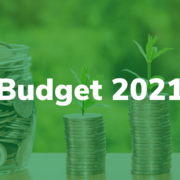 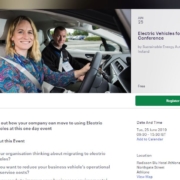 Find out how your company can move to using Electric Vehicles at this one day event!